The diamond shape vessel housing the lair of the Borg Queen, within which she directs the activities of the entire Collective. Acting as a mobile command platform.

information in the central lair. The central lair is protected via several pressure-tight oval-shaped doors and adaptive security fields, controllable by the Queen directly.The diamond is one of the few, rather large non-symmetrical vessels of Borg design which possess an unusually frail exposed frame which houses 2 diamond shape modules above and below with an additional purple module in the center. The vessel functions much like other Borg vessels however with a significantly reduced crew compliment it's primary purpose is quite simple to provide a mobile platform within which the

Queen may frequently personally oversee the assimilation of particularly resistant species or important strategical actions. The diamond is however unique in that is requires no central plexus, the Queen's chamber acts as the central plexus aboard the vessel and is also equipped with its own vinculum.[1]

The diamond possesses extremely limited offensive and defensive capbilities due to its non-combat function, it is intended that the vessel would never be dispatched without the support of additional Borg vessels, typically cubes. Possessing only rapid-firing gravamatric torpedo launchers, limited regenerative abilities and replying upon its rapidly adaptive shielding the diamond relies upon its speed and maneuverability. The diamond is a capable of activating its coils and jumping to transwarp much more quickly than the larger cube vessels, requiring a mere 5 seconds it can persue even before the instable transwarp aperture closes[2], allowing it to instantly persue any vessels attempting to escape. 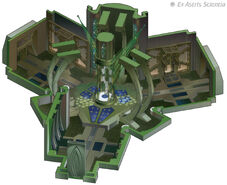 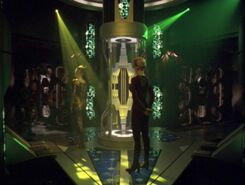 The Borg utilize a unique method of powering almost all their on-board systems, maintaining their highly decentralized interior design they do not rely upon a single warp core or such devices in order to solely generate power for the entire vessel. Each vessel generates its own power via power nodes - each device capable of generating an enormous amount of power. Borg vessels however possess hundreds, thousands perhaps even millions depending upon their size and class. These power nodes are spread throughout the vessel collectively producing a sufficient amount of power which the vessel requires at any given time. Only a fraction are active at any one time with additional redundant power sources located throughout the ship [3] which activate and begin generating power as another power node fails. As their power demands increase as a result of construct additional weapons and alcoves for newly assimilated drones the vessel may construct additional power nodes. Additionally, the method of dispersing their power ouput makes it almost impossible for intruders to sabotage the entire vessels power systems at once, in the event one power node is disabled only the small section which it powers and the devices in that section lose power for 4.8 minutes causing a manipulation effect in the vessels subspace field before another node activates and restores power [2], [3]. The only system which does not rely upon power nodes are the transwarp drives which are powered by the transwarp coils themselves.

Gravimetric torpedoes are torpedoes used by the Borg Collective, the constuction of each torpedo demanding astounding amounts of resources which makes their construction far too costly and unviable to any other race without the advantages of the vast resources of the Borg. The weapon emits an advanced graviton inversion field with a complex phase variance of gravitons to create a gravimetric distortion causing gravimetric shear in its target which causes severe structural damage.

Borg vessels utilize a High Energy Tractor Pulse (Tractor Beam) which places extreme gravitational stresses on all sides of the enemy vessel simultaniously. The magnitude of the force is tuned precisely to each ship class and vessel, once perfectly tuned the forces are insufficient to crush the vessel however sufficient to completely overwhelm the vessels impulse engines and maneuvering thrusters even if they are set to full-power they will be unable to compete against such forces. The beam also disrupts the vessels warp field, preventing it from escaping using a warp jump.

Due to the relatively low drone compliment of the diamond, repairs require somewhat more time than typical Borg vessels which can possess thousands of drones. Outside of the Queen's chamber roam a large number medical drones (VOY - Dark Frontier) which carry out the assimilation of lifeforms inside the vessels assimilation chambers.

Another relatively small however extremely effective defensive feature of a Borg vessel are small spherical droids named Automated Regeneration Units, these droids speedily roam the sub-sections, shafts and conduits of Borg vessels, repairing all technology and imperfections in the tritanium infastructure within the ship adding additional response time and causing the ship to quite essentially maintain itself and its own systems.

These fields are emplaced within Borg vessels to protect the most vital technology from harm, preventing all forms of transporter attacks and preventing biological and technological matter from passing through however they are typically not activated until a threat has already been detected on-board. Borg drones may however walk freely through these fields.

External Borg ship design follows a pattern of foregoing shields as a primary defensive measure in favor of relying upon extremely strong, resistant and regenerative hull armour. Regenerative Hull Armor and Ship SystemsThe exterior hull armor of all Borg vessels and stations have the capability of regenerating quickly and constantly, granting an enormous boost to survivability in pro-longed battles.The exterior of the diamonds possesses numerous conduits conduits which act like blood vessels and capillaries transporting automated regeneration units to the damaged areas, healing much like a biological body would. The creation and distribution of the automated regeneration units are goverened by the ships equivilent of a heart, the Automatic Regeneration Matrix.

Whilst the Borg do not use shielding as a primary means of defense, Borg vessels do possess shielding for the purposes of propulsion, internal security and as a second line of defense. Adaptive Shielding casts an extremely low power force-field around the exterior of the Borg vessel which samples each particle beam which passes through. This data is recorded by the Adaptive Shield Matrix which records and remodulates the vessels primary shield grid to the counter-frequency of the opponents weapons, allowing Borg vessels and stations to become immune to that particular weapon frequency.

Unlike the majority of the other species in the Galaxy, the Borg do not shield their entire vessel inside of a single bubble extended around the vessels exterior, Instead, they cast their shielding across their hull, re-enforcing it. This is done by dividing the external surface area in-to grids, each grid possesses its own shielding known as shield grids [1]. This method possesses several benefits, firstly due to the shielding covering a much smaller area, its strength is far greater, this method also allows the drones in each grid to focus upon maintaining and repairing their own grid with greater efficiency than repairing the shielding across an entire vessel. When the shielding of one section is offline, the rest of the vessel may remain shielded and the drones within the damaged grid focus upon repairing their own shield grid as quickly as possible.

The high level structural integrity field further increases the durability and damage resistance throughout Borg vessels hull and bulkheads which add a further overall increase to the robustness of the vessel itself.

Diamonds are capable of rotating in any direction, allowing them to use all of their weapons to their full capacity when needed, allowing for a rapid rate of fire of torpedos.

The standard warp drive is capable of a maximum speed of 9.98, meaning newly developed Starfleet ship classes such as: Sovereign, Intrepid and Prometheus are able to slightly outmatch the vessel at warp speed.

Within unison with the Transwarp Hub network maintaining the stability of the Transwarp conduit network, Borg vessels may engage their Transwarp Drive and accelerate to unimaginable speeds, approximated to be twenty times the speed of standard Federation warp speeds, this grants Borg vessels high maneuverabily and quick deployability across the galaxy.

A Borg cube projecting its structural integrity field ahead of itself before it enters a transwarp conduit.

The statistics regarding internal volume were all speculation stated on ditl.org by its author Graham Kennedy of which I completely agree with using the Borg interior shots as a reference the entire inside of the vessel seems to be a huge void, which begs the question of where the technology like vinculums and the cone shaped core we see on First Contact are?

"the vessel saves a great deal of power which is re-routed in-to other more vital systems such as weapons and shields"Speculation based on observation, never seen a turbo lift or staircase in a borg ship so they obviously save power which allows them to put it in-to every other system and it's more efficient anyway which the Borg are all for however as the power source for a Borg vessel is a complete mystery the need to save power is questionable.

All of the data was extrapolated based upon the figured given by Graham Kennedy's ditl.org without his figures I would have been completely at a loss. The explaination of how the systems work are no longer theoretcal due to evidence from best of both worlds.

Logical deduction because otherwise if they used the same force for all vessels every shuttle would have been crushed like a tin can when they used it.

Assumption and speculation based upon the well-founded establishment that the Borg use elements of organic design in everything they do, makes perfect sense and explains why the strange conduits should be covering the outer surface instead of a smooth chrome armor like other races do.

The way I explaned thrusters is once again not strictly proven or stated anywhere but it's the best guess to explain how a Sphere can both move forward and rotate simultaniously,

Community content is available under CC-BY-SA unless otherwise noted.
Advertisement